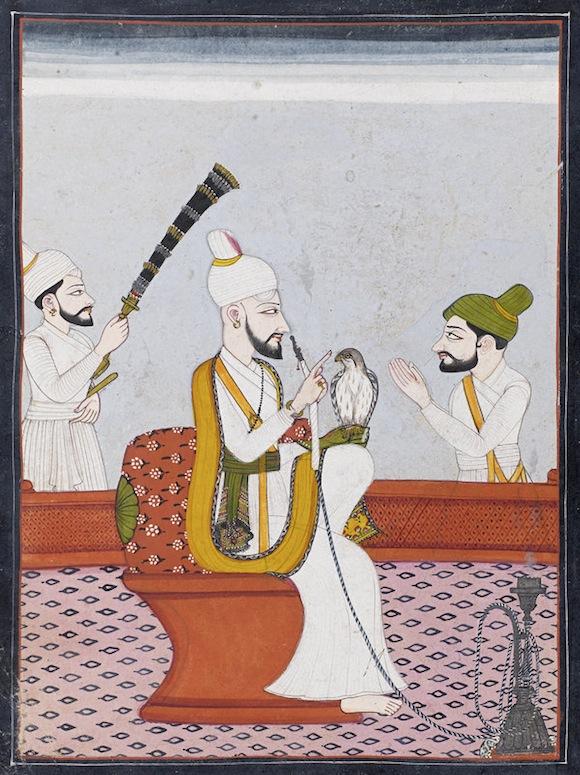 Property from the collection of the leading Mughal scholar, the late Dr. Linda York Leach (1942-2006) in Bonhams next Islamic and Indian sale on 24th April, offers a rare and exciting opportunity to collectors.

Interest and scholarship in Indian miniature painting has grown considerably over the last fifty years and Dr Leach was central to this renewed scholarship. Dr Leach is firmly placed among the leading academics in the field of Indian miniature painting from the last few decades and her miniatures, works of art and working reference library reflect the important contribution she has made. The beautiful garden she planted with her late husband, the Englishman and leading Civil Servant at the M.O.D. John Critchley, in Richmond-upon-Thames show another passion by this remarkable academic – a passion for English garden roses.

The Rajput schools of Indian miniatures are well represented in her 30-piece collection. Among the notable items there is an image of the splendid jamas in fiery orange worn by the two early nineteenth Jodhpur rulers seated in conversation, £3,000-4,000; the portrait of a late eighteenth century Mandi prince holding a falcon estimate £1,200 to £1,500; and a father teaching his son falconry, provincial Mughal, Rajasthan 18th century, estimate £3,000-4,000. There is also a large and unusual topographical map from Northern India of a fortified hill top fort, early 19th century, estimate £8,000-12,000. Bronzes, ivories, and textiles from the collection are also to be offered.

Linda York Leach was born and educated in Michigan, USA with her first degree being taken at the University there. In 1977 a Symposium on Pahari Painting was held at the Los Angeles County Museum. This was a memorable gathering of academics, museum curators, collectors and dealers from worldwide destinations culminating with Edwin Binney 3rd giving a personal tour of his collection at the San Diego Museum.

It was at this symposium that Linda Leach first came to attention of Robert Skelton who was able to guide her to the mammoth task of cataloguing the Mughal and Indian miniatures in the Chester Beatty Library, Dublin resulting in the publication in 1995 ‘Mughal and Other Indian Paintings from the Chester Beatty Library’. This was certainly her magnus opus although in 1986 she had already completed the catalogue of the Indian Miniature Paintings and Drawings in the Cleveland Museum of Art. She also published in 1998 ‘Paintings from India: Vol VIII. Naser D.Khalili Collection of Islamic Art.’