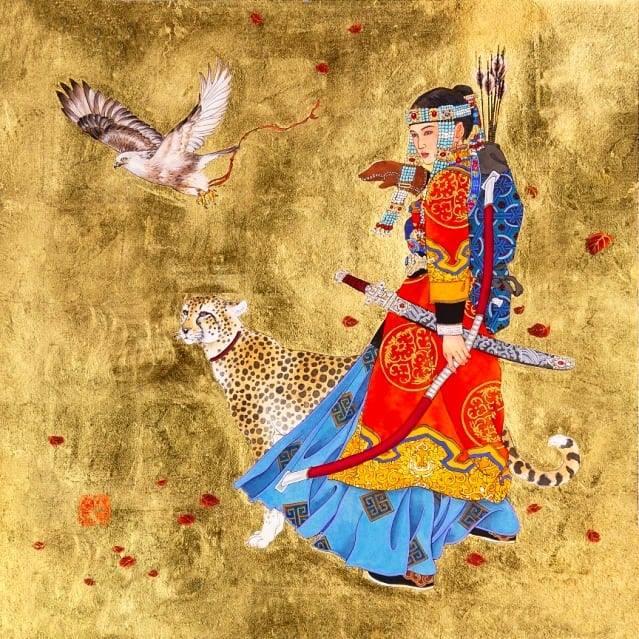 Khutulun (c. 1260 – c. 1306), also known as Aiyurug or Aijaruc, was the greatest female athlete in Mongolian history and a wrestling princess whom no man ever defeated.

The princess, a great-great granddaughter of Genghis Khan, excelled in the three Mongol sports of horsemanship, archery, and wrestling, as well as in warfare.

Khutulun grew up with 14 brothers and seemingly learned from an early age how to confront and beat them. As she grew older, she joined the public competitions and acquired great fame as the wrestler whom no man could throw. She became ever richer by winning horses from defeated opponents, and eventually her herd of 10,000 rivaled the herds of the emperor.

Khutulun’s athletic triumphs made her the ideal companion for her father in battle. Her presence, mounted next to him on the battlefield, extended her reputation for past athletic victories into an implied guarantee of dominance on the battlefield. Throughout their lives, the two constantly defied the efforts of her cousin, Khubilai Khan, to rule over the tribes of the steppes of western Mongolia and Kazakhstan and over the mountainous regions of western China and Kyrgyzstan. They resisted every army sent against them and kept their homeland permanent free of rule by his Yuan Dynasty.

With her success in battle and in sports, Khutulun refused to marry unless a man could first defeat her in wrestling. Many men came forward to try, but none succeeded. Her parents became anxious for her to marry.

According to Marco Polo, a particularly desirable bachelor prince presented himself around 1280. Most opponents wagered 10 horses, or at the most a hundred, to compete against her. This unnamed bachelor wagered a thousand horses, and Khutulun’s parents pleaded with her to take a fall and let him win.

She not only defeated but also humiliated him, and he disappeared, leaving behind the additional thousand horses for her herd but having shattered her parents’ hopes of marrying her to a worthy suitor.

Khutulun consistently outperformed her many brothers, on the wrestling field as well as the battlefield. While Qaidu Khan’s other children assisted him as best they could, he increasingly relied on Khutulun for advice as well as for political support. She was unmistakably his favorite child, and according to some accounts, he attempted to name her to be the next khan before his death in 1301.

Her brothers resisted. She may not

have actually wanted to be monarch as much as to be the chief officer of the army. She placed her political support behind her brother Orus in return for a plan to make her commander over the military. The two maintained a loyal alliance for only a few years, and by 1306 Khutulun, about 45 years old, was dead under unexplained circumstances that gave rise to stories of diabolic plots against her life.

With many thanks to Tula Stapert