Poststamp from Pakistan. Will and Power by Abdur Rahman Chughtai (1894-1975) 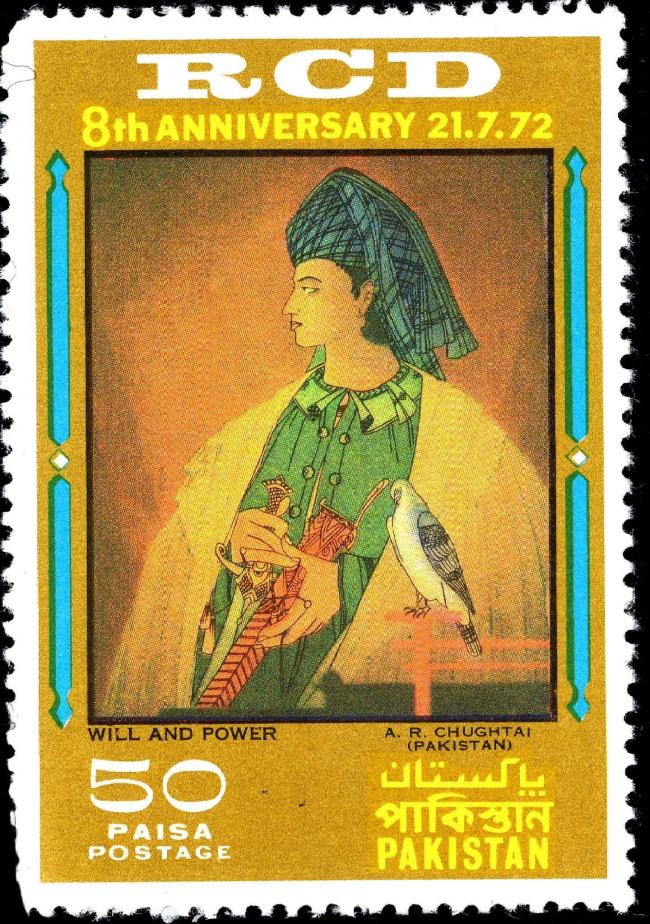 Abdur Rahman Chughtai (1894–1975) was a painter artist and intellectual from Pakistan, who created his own unique, distinctive painting style influenced by Mughal art, miniature painting, Art Nouveau and Islamic art traditions. He is considered 'the first significant modern Muslim artist from South Asia',[2] and the national artist of Pakistan.[1] He was given the title of Khan Bahadur by the British Empire in India in 1934, awarded Pakistan's Hilal-i-Imtiaz in 1960, and the Presidential medal for Pride of Performance in 1958.

With many thanks to Kamran Khan Youzsefai.

Comments with a gratitude from Alan Maurice Jenkins:

The only information I have of the person on the stamp is from the stamp catalogs.  Because the stamp was a joint issue of Pakistan and Iran there are two stamps, one from each country, with that image; the stamps were issued in 1972.

The major American stamp catalog is Scott.  Scott Catalog is my main source of stamp data.  For the Iran stamp (Scott #1649) the Scott catalog says: "Young Man, by Abdur Rehman Chughtai (Pakistan)."  Other stamps in that series, of which there are three, are titled "Fisherman" and "Persian Woman."  The titles lead me to believe that the paintings are not of actual people, but only from the artists' imagination.  Stanley Gibbons's catalog is from England, and the only other major catalog I have access to, lists the Iran stamp as: "Will and Power (A. R. Chughtai)."

All these sources state that the "RCD"  on the face of the stamps stands for the Regional Co-operation for Development, with its 8th anniversary being 21.7.72.