Morning of the Chase, Haddon Hall in days of Yore by H.T. Ryall after Frederick Taylor 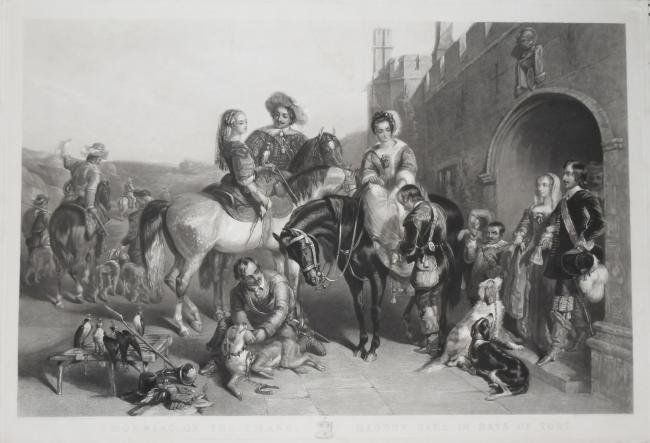 Morning of the Chase, Haddon Hall in days of Yore by H.T. Ryall after Frederick Taylor.

Some time stains in the sky. Otherwise in good condition. A good impression.

An animated and decorative scene depicting a hunting party, preparing for a falconry expedition. The falcons are visible in the foreground, lined up on a perch, whilst in the background, a member of the party has already set off with his falcon perched on his glove and with a squire accompanying him alongside the horse, looking after the dogs. The scene is set outside the entrance to Haddon Hall, which was one of the country seats of the Duke of Rutland (acquired by the family through the marriage of Thomas Manners, 1st Earl of Rutland, and Dorothy Vernon, daughter of Sir George Vernon, the owner of the Manor).