Falconry and cult of birds of prey in Middle Asia 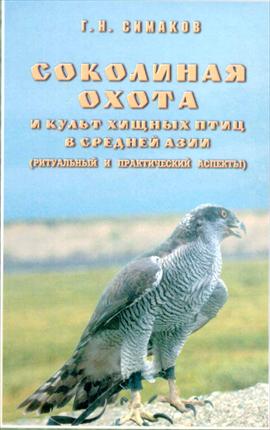 "The present book is devoted to little-studied in ethnography topic of falconry and hawking in nations of the Middle Asia and Kazakhstan. Author in the first time in native and world science considers falconry in connection with ancient cult of birds of prey, that allows to give an explanation to many social and practical aspects of this hunting from point of view of ancient religious-magic notions, to express suppositions about both origin as separate elements of falconry and hunt (art) as a whole. Analysis of specific ancient in the former times secret language of falconers of region, and in particularly - detailed consideration of folk classification of hunting birds in Kazakhs and Kirghizes occupies the special place in this work. Original field materials of author, collected by him during expedition and trips during over than 20 year- period of work on selected topic are laid in the base of book. Edition is indented for the wide circles of readers, which are interesting in falconry and hawking. Photographs by A.M.Ignat'yev are used in the book". An exclusive right for distribution of the present book in the territory of Russian Federation and outside its borders belongs to the publishing house "Peterburgskoe Vostokovedenie (St.-Petersburg Oriental Studies)". Since 1951 - the year of the famous book publication by the late Professor G.P.Dementy'ev (1898-1969) "Sokola-krechety (Gyrfalcons)", which contained the whole extensive chapter dedicated to the history of falconry in Russia as a whole and to falconry with this largest wonderful falcon species, we can say that the former Soviet reader could find and read on its native language almost round zero over almost a half a century. Only several brochures in Russian were published during all post-war period, which became bibliographical rarity very soon. But these publications had a deal with certain region - Kirghizia or Kazakhstan and did not cover the whole territory of the former Soviet Union or Middle Asia as whole. And now publication of this book has set off an effect like "an explosion of the bomb". Practically nobody of ornithologists and honestly speaking almost all falconers from the territory of ex-USSR knew nothing or very little about long-term work of the author of this book - Mr.G.N.Simakov by very simple reason - author is ethnographer and not ornithologist. But at the same time, falconers and ornithologists-raptorphiles taking this book were shocked by the depth and seriousness of the study and scientific approaches to this problem. It seems to us but nobody before Mr.G.N.Simakov, excluding in certain aspect Prof.Dement'yev itself, did not study this problem so deeply and so fundamentally. The list of literature includes 421 titles - so large list of references is given in Russian literature in the first time. Coverage (scope) of literature is very huge indeed and includes the list of literature in Russian language of 337 sources, literature in Western-European languages of 23 sources, literature in Kazakh, Kirghiz and Turkmen languages of 17 titles and Archive materials of 19 titles, materials which are keeping by author of 6 titles and personal publication of author on the topic of monograph of 19 sources. Collecting archives materials an author worked and could find interesting original materials at the following archives: Archives of Museum of Archeology and Ethnography named after the Peter of the Great of Russian Ac. of Sc. (14 sources), Archives of the State Museum of Ethnography of Nations of the USSR (1 sources), Manuscript funds of the Institute of History of Ac. of Sc. of Kirghiz SSR (3 sources) and Central State Historical Archives of Ac. of Sc. of the USSR (1 source). In Introduction to his book an author wrote that he carried out the field works since 1971 till 1994 in different parts of the Middle Asia and Kazakhstan (total about 15 expeditions and business trips). The most often he visited Kirghizia, particularly Issyk-Kul' Region, which is one of the centers in region, where falconry and all its forms both in ancient time and at the present time were represented the most clearly, and also Osh Region with Naryn and Talass Valleys. Besides that, the field works on the topic of monograph were carried out in Kazakhstan (Mangyshlak and Chimkent Regions), in Turkmenia (Kransovodsk and Tashauz Region), in Karakalpakia (Takhtakupyr District), in the Khorezm Region of Uzbekistan. Compiled and translated by Jevgeni Shergalin, E-mail: zoolit@hotmail.com