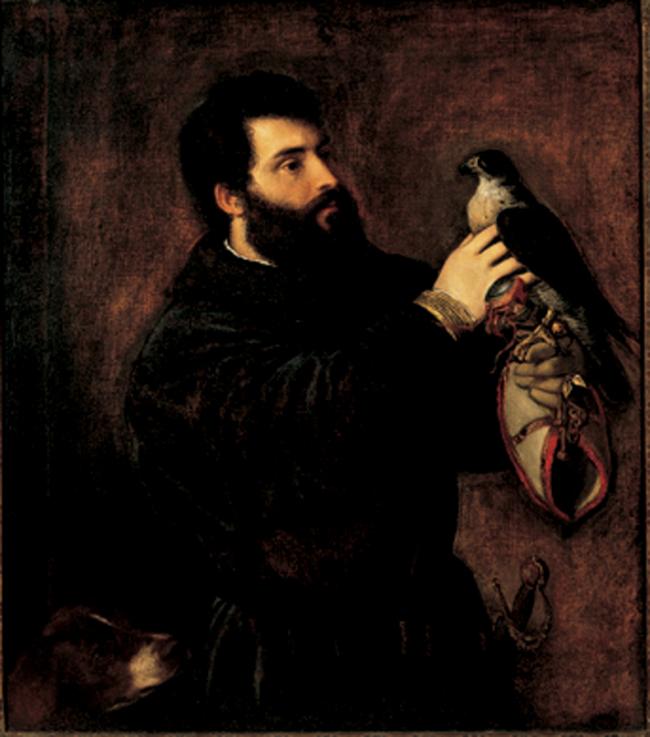 The outstanding painter of his era, Titian redefined painting and developed a style that not only determined the direction of Venetian painting for the next two centuries but profoundly influenced the work of geniuses distant in time and place, such as Rubens, Velasquez, and Rembrandt. A consummate colorist, Titian exploited the oil medium — relatively recently introduced to Italy — to create effects that were quite unlike the clear, linear images of previous Florentine and Venetian painting. Modulating color and shadow through use of an unprecedented number of layered glazes, Titian created forms that are soft and glowing. His preference for diagonal emphasis in composition further broke with the classical conventions of Renaissance art and added dynamism to his canvasses that presaged the complexities of Baroque painting.

Chiefly remembered as an admiral, landowner, and patron of the arts, Giorgio Cornaro was, with his father, instrumental in importing falcons from Crete for the nobility of Italy, an activity perhaps celebrated by the inclusion of such a bird in this painting, which was commissioned at the time of his coming of age and election to Venice’s Great Council (Maggior Consiglio). Titian’s sympathy for the sitter is apparent in the sensitivity with which he portrays the handsome, convivial, and robust young nobleman. The artist took great care with the rich costume of the sitter, paying particular attention to the falconer’s paraphernalia and emphasizing the splendid bird perched on the elaborate glove as well as showing the ornamental hood and pendant leather jesses with bells attached. When the painting entered the collection, the merits of Titian’s genius were hidden primarily behind a muddy varnish, and it was deemed a tired example of the work of a great artist. However, with recent conservation at the J. Paul Getty Museum, Titian’s colors, his profound use of lights and shades, and his great sensitivity to the character of his sitter are again revealed, and this portrait of Giorgio Cornaro takes its place as one of the finest works of the Italian Renaissance in an American collection.